I remember one of my elementary school teachers taping our thumbs down so we could see how hard it is to function without them. I don’t remember which grade it was, so I don’t know which teacher, but that was one of those hands-on (pardon the pun) things I enjoyed and remember from school. Jeffrey asked me a few weeks ago, “Why do we need thumbs anyway?” I tried to explain to him, but he wasn’t convinced. We were in the car (why do they always ask the good questions in the car where you can’t look things up?) so I couldn’t do more than that. Today, it was actually part of his science lesson. We don’t do all the experiments, and we laughed and joked about this one. He was convinced that we don’t need our thumbs for anything and I told him that, in that case, it wouldn’t matter if they were taped down. He argued that he “might” need them. We went back and forth and he finally decided to do it. It took him about three seconds to decide he might need those thumbs after all.

Of course, Bennett had to get in on the action. That lasted about three seconds, too. I didn’t try to tape his thumbs down. I just lightly put a piece of tape on his hand. He didn’t approve. 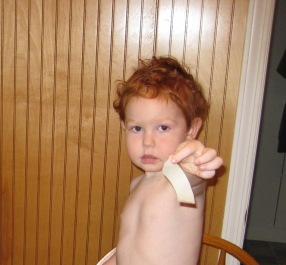 Then we went into the playroom so Jeffrey could try the MegaBlocks. (Jeffrey has oodles of real Legos, but in the interest of the baby not eating the toys, we’re using MegaBlocks right now.) Putting them together wasn’t much of a problem, but taking them apart was. Too bad I missed that shot. He was using his feet. 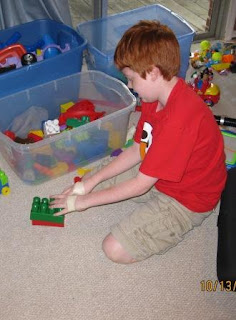 I reminded him that he wouldn’t be able to play video games without his thumbs. “That’s right! I could use my pointer fingers – or index fingers – but it would be a lot harder.” And even after all that, when we took the tape off, he said, “I still don’t see why we need thumbs.” *sigh*